The main technical solutions protected by patents of Ukraine. Company "HIPRO" reserves the right to change the formwork elements’ design. The site materials are most promotional and not intended for use during the installation and operation of equipment. Technical information on installation and dismantling of formwork is contained in "Operating Instructions for modular formwork" what is included in the formwork assembly.

Welcome to the "Hipro" group' site, the Ukrainian manufacture of formwork.

Ukraine was the one of the most developed republics of former USSR. And, nowadays, it is one of the countries with developed industry.

Up to this day, Ukraine is producing space rockets and Earth satellites, high military equipment (tanks, rockets, indication complexes), as well as modern supersonic airliners, powerful railway locomotives, turbines for the hydroelectric and power stations, the equipment to sphere of solar power, IT- technologies and a lot of other technical equipment.

Certainly, it wouldn't possible without developed building and construction industry and production engineering in building, which were used for construction of scientific centres, power stations, factories, power dams, etc.

The "Hipro" Group' history, as a new player on the formwork market, had begun since 2001.The intelligence of engineering centre with 50-years' experience of designing equipment for construction, including formworks for beton underlies was put in base.

As any other manufactures, our company was "to make the way" to the building market struggling with the mistrust of customers about new products. In the conditions of the keen competition with the most famous world manufactories of formwork, the tender was won for delivery of the formwork to the construction of the factory on rare radioactive waste processing at Chernobyl atomic power station (the project " Ukryttia" in the frameworks of EBRD financing program). After a while, the interesting but not less difficult construction projects were appearing. Among them, there was the control tower for ships' traffic at cape Ochakovo on the Black Sea, drain communication tunnels in Ashgabat (Turkmenistan), the series of the monolithic frame houses in Kyiv and regions. The "Hipro" Group' offers: formwork, formwork to rent, building equipment.

After less than ten years, "Hipro" Group became and still occupied one of the leading places in formwork production in Ukraine. Today many factors are evidence of popularity of the formwork "HIPRO". One of them is the growth of production and sales of our products, which are used by more than 300 building companies and firms.

«The basic principle of the group of companies "HIPRO" - constantly moving forward in improving performance of its products
and the maximum satisfaction
needs of customers. Our main
goal - to become the best company - manufacturer of formwork
in Ukraine». 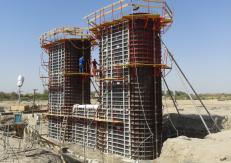 To build a bridge in Turkmenistan

"HIPRO" Group continues to supply formwork for building the bridges bearings in Turkmenabad, Republic of Turkmenistan. 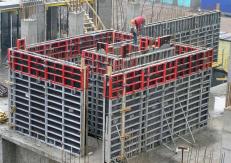 Designers of our company have developed a series of budget panels named S-Form to meet the needs of customers while crisis. 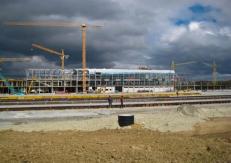 International airport in Turkmenabad (Turkmenistan) with participation of equipment "Hypro"

Company "HIPRO" startes to deliver equipment for the construction of international airport in Turkmenabad (Turkmenistan).